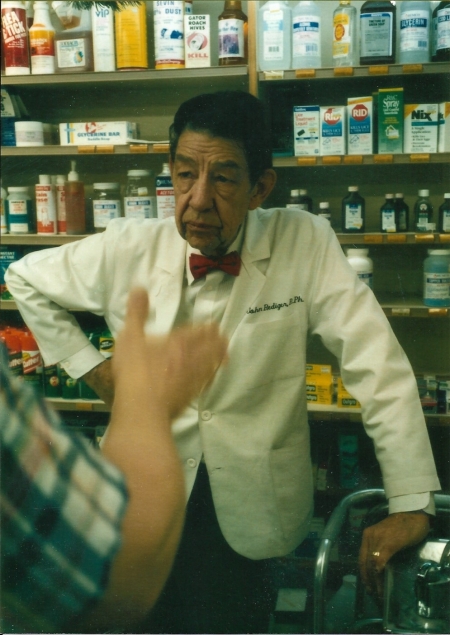 Floyd (John) Rediger graduated from the University of Nebraska School of Pharmacy in 1939 in Lincoln, Nebraska.  He moved to the Houston, Texas area due to his asthma.  At the time he went to work for Walgreens where he met the love of his life, Nancy Holt.  Soon after Floyd John Rediger went on to serve in the United States Navy Malaria Control in the Philippines during World War II.  When the war was over, Floyd John Rediger returned home and moved his wife and son, John T Rediger to San Angelo, TX.  He then returned to manage a Walgreens.  Soon after, they had another child, Debroah Rediger.  After a four year stay he decided to move to McCamy, TX for a partnership with Ed Halamicek with ECO drug.  The stay in McCamy lasted about 6-7 years but he actually intended to settle.  After his partner Ed was killed in a car accident, Floyd John Rediger moved his family to Pecos, TX to buy a store in 1954, which he named Redigers Pharmacy.  In 1960, Floyd and Nancy built a new and much bigger building with a better location.  Redigers Pharamcy continued to thrive with the help of John T. Rediger.  In 1976, the store was enlarged to serve not only the drug store, but also had a Hallmark and gift area.  Nancy Rediger had a wonderful talent of gift wrapping and soon became very well know for it.  Redigers Pharmacy was well known for its excellence in customer service and quality prescriptions, Hallmark cards and gifts.

In 1987, Floyd John Rediger sold Redigers Pharmacy to son John T. Rediger.  John T. Rediger R.Ph. Compounding pharmacist operated Redigers Pharmacy until 2013.  John did a large amount of compounding for doctors and hospitals.  He compounded TPN, sterile hormones and injectable compounds.  John also specialized in immunizations and diabetes.  He had a diabetic shop in the store where diabetics could go in and get all their necessities.